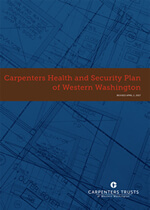 The amount allocated to your account in the one-time allocation was based on your total career hours reported to the Carpenters Health and Security Plan as of December 31, 2007, divided by the total hours reported for all carpenters and retirees eligible to share in the allocation. No employer contributions have been allocated to the accounts since the initial funding.

Account balances are adjusted to reflect payment of eligible expenses.

Prior to January 1, 2014, accounts were also adjusted upward or downward as of the last day of each calendar quarter to reflect the following:

Your account balance is reflected in your quarterly benefit statement.

No New Allocations on and After January 1, 2014

Employer contributions were not allocated to accounts following the initial one-time allocation, because reserves were not available for funding. Moreover, in order to comply with the Affordable Care Act, no additional employer contributions or investment gains or losses will be allocated to the accounts on or after January 1, 2014, unless further action is taken by the Board of Trustees.

How May We Help You?